More so than any other type of TV programming, live sports have been resilient in the face of the rise of time-shifted viewing, over-the-top (OTT) content services (e.g., Netflix and Amazon) and Video on Demand platforms. The viewing experience of any sports game is definitely important to the viewer. Something as simple as sports lighting fixtures enhances the viewing experience and potentially improves how the players perform. Demand for live sporting events has allowed sports-centric networks such as ESPN, Fox Sports 1 and TNT to command the highest fees from U.S. cable operators. This resilience and profitability is easy enough to explain.

Live sports versus everything else

Sports are most fun to watch as they happen, and are often viewed live in social settings such as restaurants. Events like the Super Bowl and the NCAA Tournament draw in tens of millions of simultaneous viewers. Recording a game with the intent of watching it later (perhaps by yourself) certainly still happens. However, with the ability to instantly look up results on the Internet if you cannot see them live, the incentive to do so is probably lower now than it ever has been.

Plus, with the saturation of the HDTV market — 80 percent of U.S. households had at least one as of 2015, according to the Leichtman Research Group — it is easy for a lot of people to have a top-notch viewing experience of a live game, whether at home or around town. The growing popularity of live sports has coincided with the rise of “cord cutting,” the term for ditching traditional pay-TV for Internet service by itself, creating a divide between different types of content:

That said, live sports are not immune to the effects of rapidly evolving TV consumption habits. Second-screen experiences, online streaming and TV channel apps are all examples of how sports viewership is changing as the IP suite becomes more central to the cable industry.

What the second screen experience means for live sports

It used to be hard to follow multiple live sporting events at the same time. This situation created challenges on days such as any Sunday during the NFL season or the first few days of the NCAA Tournament in March, when a lot of games air simultaneously.

On this front, mobile apps have been a godsend. Some of these apps, like ESPN, provide streaming of any events currently on their companion networks. Others may offer commentary, chat, fantasy gaming, etc. Live text commentary and scoreboards were the most popular types of second-screen experiences in 2014.

The rise of sports streaming

That same report from Frank N. Magid Associates revealed that 37 percent of respondents had watched live sports online, predominantly on their PCs and Macs. Mobile devices accounted for only a sliver of Internet-based sports viewership, trailing far behind TVs, as well as these larger computers. 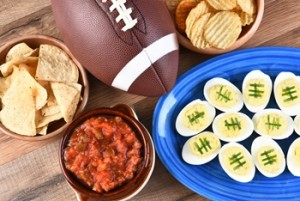 NCAA basketball is one of the most popular live sporting events in the U.S.

There are several ways to watch live sports over the Internet. Perhaps the best known is through various apps, whether for mobile devices, gaming consoles or set-top boxes such as Roku and Apple TV, that authenticate via a cable login. ESPN and Fox Sports 1 both offer solutions along these lines. Another route is free streaming.

The Super Bowl has made inroads here in the last few years, with free viewing options on Web, Xbox One, Apple TV and other platforms. However, it is worth noting that for the 2016 edition of the big game (Super Bowl 50), mobile streaming was limited to Verizon Wireless customers in the U.S. To the extent that people watch sports over the Internet, it is mostly on larger-screen devices, which have predictably been the focus of cable operators and content providers too.

TV apps as a new frontier for live sports viewing

A huge chunk of sports viewing still comes from cable packages and broadcast antennas, but a growing share is being done through IP distribution, either via cable company set-top boxes or OTT services on streaming TV boxes. The run-up to this year’s NCAA Tournament is a good case in point.

NCAA March Madness Live, which authenticates through a pay-TV provider, is the official app for watching the tournament’s 67 games. The Apple TV version will get some exclusive features this year such as split-screening and audio switching. These amenities show that while live sports are still the calling card for cable and broadcast TV, the stakes are being raised for user experience and interface.

“The brand new Apple TV app comes with a significant feature for basketball fans: the ability to watch two games side-by-side in a split-screen interface,” Husain Sumra explained in an article for MacRumors. “The feature, which is exclusive to Apple TV, also allows users to switch the audio from both the games, allowing basketball fans to hone in on exciting matches easier than before.”

The future of live sports on cable and satellite

Cable operators will need to ensure that they continue to improve the live sports experience for their subscribers in the years ahead. Traditional QAM, as well as IP distribution, will be important to this end. Enabling a TV Everywhere solution is also a critical element as more and more TV content is being viewed on mobile devices in the home.

Hybrid STBs, such as the IP Hybrid Set-Top Box available from Evolution Digital and its eVUE-TV™ IP Video platform, can help cable providers preserve the unique drawing power of live sports, while also branching out into new areas such as second-screen apps and Internet-enabled experiences, like live comments and commentary, scoreboards and split-screening. These efforts can take place concurrently with the development of VOD platforms that leverage similar infrastructure to cater to the habits of end users with multiple devices. These live comments can be enjoyed by viewers who are betting on games or taking part in FanDuel fantasy games. This is because users can interact with each other, make friends who enjoy the same sports and exchange thoughts on who they think the most likely teams to win are!